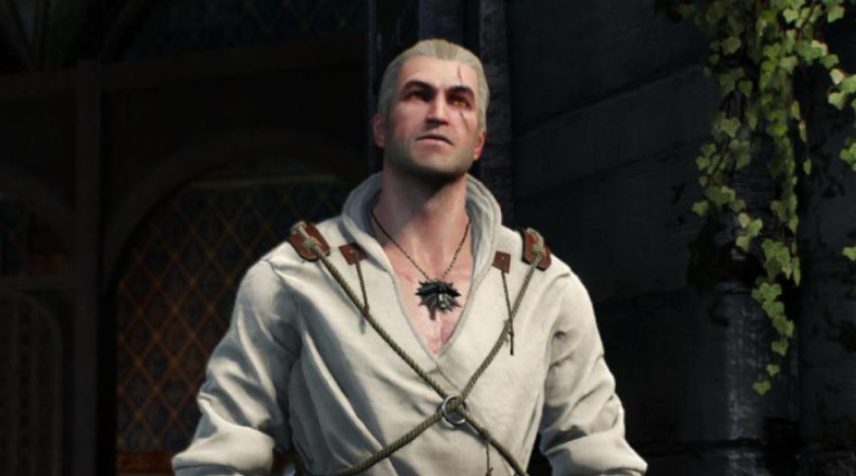 I generally prefer role-playing games in which I craft my character from the ground up. Making characters is simply one of my favorite things to do in any RPG. It took me a while to try the first Witcher game due to it having a pre-set protagonist. To my surprise, it turned out that the character of Geralt of Rivia was far and away The Witcher’s best feature.

A Geralt of Rivia Primer for the Uninitiated

OK, a few words to those who may not know this character. He’s the protagonist of a series of fantasy short stories and novels by the Polish author Andrzej Sapkowski. These were the source material for a series of video games and the recent hit Netflix series: The Witcher.

Geralt is a “Witcher.” Witchers are itinerant mercenary monster hunters. Their ranks made up largely of orphans who undergo a magical ritual to give them mildly super-human abilities. They then spend most of their early life in dangerous training before being let out into the brutal world.

Geralt is one of only a few remaining witchers in the world, something of an anachronism in his own time. In addition to hunting monsters, Geralt of Rivia is often forced to deal with wizards, witches, brigands, and the politics of empires.

Grab the enhanced version of the Witcher from the humble store, you can even leave me a tip. Be warned/enticed the first witcher game features some nudity.

What Makes Geralt So Special?

I’d say the greatest quality of Geralt as a character is his own internal drama. His personality is composed of two strongly competing traits that are driven hard against one another. The first is that at his core, he is a good and decent person, a true hero who hates to see any living thing suffer unnecessarily. At war with this is his deep and abiding cynicism about the nature of humanity and the grim world in which he lives.

Neither of these two forces within him can ever overcome the other. He will moan about how people are forever ungrateful for his efforts, but he will almost always come to their defense none the less. Given a chance for true hope, love, or intimacy, he will drive a wedge of darkness into it, unable to believe it could be real. He’s a man so accustomed to disappointment that he mostly seeks life simpler pleasures knowing they are at least attainable for a brief moment before everything goes to shit.

The writers of the video games gave Geralt a wry sardonic quality. This may have come from the need to limit studio time for the voice actors, but it adds a touch of magic to Geralt that you don’t find as much in the written character. Book Geralt is more likely to lecture at length after witnessing a scene of injustice or horror. Game Geralt is more likely to offer a heavy sigh and an expression that says “Shit, not this again.”

The Witcher 2 really ups the ante in terms of graphics and storytelling for the series. If you pick it up from Humble Bundle you can leave us a tip.

Geralt as a Gamer

Geralt’s world-weary cynicism strikes a special chord with me because of my own long history of playing RPGs. I’ve been on a thousand quests, fought endless monsters, saved the world untold times. After a while, the tropes, while still pleasurable, can take on an absurd and silly quality. How many descriptions of terrible monsters have I heard? How many pleas to my character as the only one that could possibly help?

Geralt is likewise a veteran of the same kinds of adventures every RPG gamer has had. His glib responses to earnest pleas for help feel refreshing to me. They also resonate with the absurdity of the situations he finds himself in. It’s a great way of having your cake, the classic fantasy tropes we rather love, while at the same time taking the piss out of it. Much like myself as a gamer, Geralt is often a little above and detached from the histrionics of the world he is exploring. Ironically, that makes me more involved and invested in what’s happening and in Geralt himself.

If you’re an avid book reader, I suggest getting the whole Witcher Saga. If you’re not sure, start with the Blood of Elves. I found The Last Wish to be an optional read since its a collection of short stories.

Do you play Gwent?

Near and dear to my heart is something from the third Witcher game. The designers included a game within a game in Witcher 3. Gwent is a collectible card game and is very much inspired by Magic the Gathering and all the card games it spawned. My addiction to Magic the Gathering was no small thing, and in the game, Geralt (if you so choose) can challenge friends and tavern keepers to play Gwnet while he tries to build his collection of cards.

Geralt could have been out slaying some blood-crazed undead monstrosity moments earlier, but as he walks into the tavern, covered in gore, and approaches the tavern-keeper he mutters, “um, would you by any chance… play Gwent?” The little boy in my heart and the one in Geralt’s do a little dance of joy in recognition of a kindred spirit at these moments.

The Witcher 3 is a straight-up masterpiece of game craftsmanship. Pretty much everything about it is dead on amazing. Humble Bundle has the Game of the Year edition available.

Geralt is also a bit of a Marry Sue, but…

Yet the storytelling does something to keep Geralt from feeling like a cheat. No matter how powerful and capable Geralt is, he never finds heroism easy. He’s always a few steps short of getting a true victory over the forces that stand against him. In the games, this is a little less true, as they do reach satisfactory endings, but every moment until then he’s hard-pressed and always falling a bit short of his own goals and aspirations.

I listened to the whole The Witcher Saga on audio. I highly recommend getting the audiobooks for sheer entertainment value — Peter Kenny does superb voice acting as narrator.

The final thing about Geralt that makes him so endearing is that he’d make for a good friend. His loyalty to those he cares about and his strength makes

This website uses cookies to improve your experience while you navigate through the website. Out of these cookies, the cookies that are categorized as necessary are stored on your browser as they are essential for the working of basic functionalities of the website. We also use third-party cookies that help us analyze and understand how you use this website. These cookies will be stored in your browser only with your consent. You also have the option to opt-out of these cookies. But opting out of some of these cookies may have an effect on your browsing experience.
Necessary Always Enabled
Necessary cookies are absolutely essential for the website to function properly. This category only includes cookies that ensures basic functionalities and security features of the website. These cookies do not store any personal information.
Non-necessary
Any cookies that may not be particularly necessary for the website to function and is used specifically to collect user personal data via analytics, ads, other embedded contents are termed as non-necessary cookies. It is mandatory to procure user consent prior to running these cookies on your website.
SAVE & ACCEPT
LIVE NOW! CLICK TO WATCH.
CURRENTLY OFFLINE :(