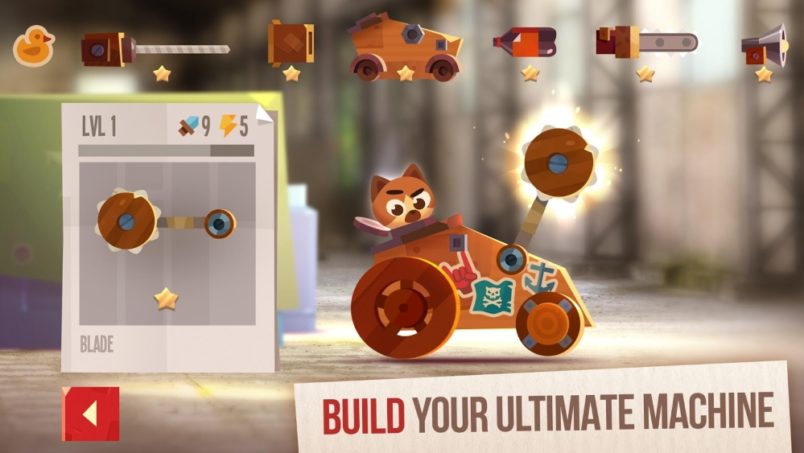 C.A.T.S or Cats, as I’ll call it henceforth, is a casual free to play mobile game I’ve been playing the last couple of months. The acronym stands for Crash Arena Turbo Stars, but really, it’s about cute little cats battling one another in AI-controlled combat carts.

Cats is a pretty simple game. You build combat carts from a collection of components that you earn as you play. Carts consist of a Body, Wheels, Weapons, and Gadgets. Each Body has 2 or 3 hardpoints on which either weapon of gadgets are attached and 2 or 3 axels for wheels to attach. Slap your cart together and you are good to go.

The action centers around you, pitting your cart against an opponent’s cart. Each starts opposite one another and the charge forward, weapons ablaze. After a few seconds, the walls of the arena, which are giant chainsaws, start to close in, destroying any cart they touch. You have no direct control of the carts, but they obey a set of in-game physics, thus two given carts in combat will always have the same outcome.

While these battles may sound like a mere numbers game, there is more to it than that. Each body has its own geometry, each wheel different speeds, each weapon different damage, range, and rate of fire, and each gadget its own special effect. As you advance in the game, you will learn different strategies for cart building, always subject to which parts you happen to have on hand. The result is that combat is both wild, chaotic, and very strategic.

This basic combat model is used for a number of game modes. Championship is the central mode. Here, you compete with 14 other players over a period of 48 hours. The top 6 players advance at the time limit and any player that can beat every opponent one after the other with a single cart advances automatically. Each time you advance, you get access to more powerful parts. After 24 levels you access the most powerful parts. From there, you can either continue to refine your carts or start over at rank 1 with no money or parts, but new unlocked game options.

There are also Quick Fights that pit you against a random opponent. These give you “Boxes” which you can then choose to unlock. Each box contains random parts of your level or below. Once you unlock them, a timer counts down to when they are opened. You can also earn boxes in other modes of play, but this is your main source. The game also awards boxes from “sponsors” which are simply login rewards.

There is a Gang system that earns special gang boxes. Each gang member can compete in battles against members of other gangs to earn trophies, which accumulate to unlock boxes for everyone in the gang. These battles are extra strategic as you can bring 3 carts to face against 3 of your opponent. Mixing and matching the carts gives you another element of strategy.

Much of the play is about advancing levels to get more powerful carts and unlock new components and weapons to play with. There is a fair bit of luck in the quality of components you get, but there is considerable learning to be done about how to play well given the materials you have to work with. It is a free to play game, but you can spend money on special boxes that are likely to contain rare or powerful parts.

There are a few more gameplay elements: upgrading parts, part boosters, league ladders, cosmetic stickers, cat costumes, betting, and other fiddly bits that can keep you busy with the game for a good long while.

If you want to try out CATS you can hit up their website here.

I really like Cats for a number of reasons. The first of which is the level of investment needed to play, vs the reward of fun. There is very little grinding involved in Cats. The act of advancing tends to make the resources you have already acquired obsolete, so it is a constant process of adapting your Carts to the best components available. This keeps you on your toes while playing at all times. The timing systems in the game encourage playing every few hours for short periods of time, rather than single marathon sessions. Every action in the game brings rewards.

The way it handles premium currency is also nice. Your purchases are always going to be random loot boxes filled with parts. These give you a boost at your current level and will carry you forward for a while, but inevitably it will become obsolete over time. This means the game remains pretty much based on a players skill, but you can get some help if lady luck has not been with you. Like most FTP games I like, I spent at least a little money to show my appreciation but I never felt like I had to spend to advance.

The battles are just plain fun. There are rocket boosters that can send your cart careening wildly through the air. Balloons that make your opponent float around. Slow but powerful lasers and shotguns that send both carts careening backward. It’s chaos incarnate, yet every device interacts in a predictable way. It’s the interaction of the two cart designs that create the beautiful chaos. Mind you, not every battle is complicated, some carts just drive at each other guns blazing until one of them explodes.

The art and sound design are top-notch. The carts and the cats that drive them are very cute. I’ve spent some of my premium currency on hats and outfits for my cat, not something I typically do in FTP games if there are other options. Bugs are minimal and they dev’s are good at engaging with the community and adding new content periodically.

Absolutely try out C.A.T.S.  Even if it doesn’t quite grab you as it did me, I’m sure you will have at least a little fun with this well-designed game.