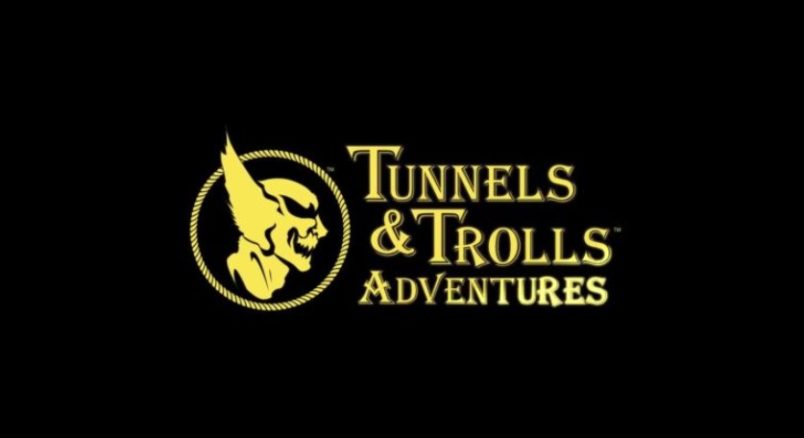 Tunnels & Trolls Adventures is a moble game is among the truly Old School role-playing games of my youth. It was first published in 1975; the work of Ken St. Andre. Among the things, it was famous for where it’s solo adventure modules that let you play the game all by yourself.  It’s those adventures that seem to have inspired the mobile game version of Tunnels & Trolls.

What is Tunnels & Trolls Adventures?

Tunnels & Trolls owes its core gameplay to choose-your-way adventure books. These are branching narrative stories where you decide the protagonist’s actions and face the consequences of those choices. In addition to the narrative choices, Tunnels & Trolls includes some classic RPG elements in character building and combat.

You can either play one of the pre-generated characters or create your own by rolling up ability scores and choosing a race. You can be a Human, Elf, Dwarf, or Hobb. Ater that, pick a name and your character is ready for adventure.

Adventures contain short “modules” with between 10 and 30 choices to make before the adventure comes to a conclusion. If you succeed, the game rewards you with experience points and treasure. If you fail, you die. Death isn’t really anything more than the premature end of the story. Your character can continue in further adventures if you like, or even have another go at the same module.

Free To Play with Premium Options

Tunnels & Trolls is free to download and mostly free to play. The game has two currencies: Diamonds and Hearts. You can use Diamonds to purchase an adventure permanently. This lets you play it at any time without cost. Hearts permit a single playthrough of an adventure. The game gives you 20 of these to start with, enough to try all the current adventures at least once. The game also offers a handful of adventures that you can “buy” for free. You can pay real-world currency to get Diamonds or Hearts, and you can get hearts by watching advertisements for other games.

Adventures are presented primarily as text, though there is always an accompanying picture and an atmospheric soundtrack that roughly matches the scene. Music plays in the background with occasionally atmospheric sound effects included with a scene.

Succeeding at adventures is a mix of wise judgment and luck. The choices you make often initiate dice checks against your ability scores or dice-driven combat encounters. It’s quite possible to make all the right choices and still end up dead if luck isn’t with you. Likewise, poor decision making can sometimes be saved by virtue of a little luck with the dice. Your character’s strengths and weakness also play heavily into your chances for success.

You can still get Tunnels and Trolls on the Apple Store here.

I’m sure you can find fun roaming within Tunnels & Trolls but there is much to critique and criticize in the game’s design and execution. Had Tunnels & Trolls Adventures been better conceived, it would be right up my alley. As is, it doesn’t quite make the grade.

The descriptive text in the game is on point. The short descriptions are evocative and clear. You have a good notion of what is going on in the story, and what your narrative choices might lead to. Things you do early in the story flow nicely into the descriptive text due to a fair bit of railroading narratives. But they handled it with grace such that it feels very responsive and fresh the first time you play an adventure to the end.

The feel of the game is very “old school D&D dungeon crawl”. This is not about character arcs or meaningful drama. It’s about surviving in dangerous situations and having some outlandish adventures, then finally grabbing up the treasure. If you want to scratch that 1970’s to early 1980’s RPG itch, T&T has you covered.

Finally, Tunnels & Trolls Adventures has a very fair Free-to-Play model. At least one of the free adventures ranks among the most amusing of those available. The 20 hearts you get is enough to try at least all the adventures once, and play a few of them until you can find your way to the end. Watching videos gets you more hearts, so you can pretty much play T&T for free if you don’t mind watching some adds.

Android users can get Tunnels and Trolls here.

There is a lot wrong with Tunnels & Trolls Adventures, but most of it can be laid at the feet of the RPG mechanics it uses. Character generation is a great/terrible example. Characters have 6 ability scores, determined by rolling 3 six-sided dice. If you roll a triple number – three fours for example – you roll again and add to the first roll. This means a lucky character will have far higher ability scores than other characters. You can roll characters as often as you like, so the only rational choice is to just keep rolling dice until you get something obscenely lucky. Choosing a race is merely a matter of picking a set of stat bonuses. Humans get none, Elves get a trade-off, and Dwarves and Hobbs get massive bonuses to key combat ability scores. Choosing anything other than a Dwarf or Hobb is strictly a handicap.

Leveling up a character involves adding a single point to a single ability score. This feels completely inconsequential to most characters compared to the luck involved in making the character int he first place. A level 20 character could well be considerably weaker than a level 1, not that you would ever make it to level 20. That is because you often live or die by the ability checks and combat encounters. Both are such that if you have high stats, they are trivial and if you have low stats, they are near impossible. Moral of the story, roll those dice until you have a broken character or expect to die constantly.

Adventure design is also an issue. The combat and the ability score problems are part of this, but that old-school RPG mentality is also at play. Very rarely do small choices add up to a result. In a game where you have a health bar, that would be a very realistic mechanic to employ. Instead, most of your deaths are due to failing a dice roll. Choosing options that lead to more favorable rolls is part of the game’s strategy, but in some adventures, if one of your stat’s doesn’t measure up, there is simply no way to complete it successfully. One of the starter adventures features random monster encounters. Roll wrong and you are going to be facing down a Balrog at level 1 with no equipment and pretty much no hope of winning.

Of course, it may well be the many deaths to dice rolls are part of the design, since, without them, many of the adventures would be breathtakingly short. The smaller adventures can often be completed with as few as 4 choices and a couple of dice rolls. While you may suspect there are many branching possibilities you missed, in most cases, that is not true. A lot of the narrative choices all lead back to the same choke points in the story and are only the illusion of choice. The better adventures avoid this cheap tactic, but they are more the exception than the rule.

The production value in of the game leaves something to be desired. It is, at its heart, a text adventure game. That means you shouldn’t expect fantastic graphics or sound. But since they do make an effort to have illustrations, they could often be better. Some are quite decent and evoke an old-school RPG vibe but others are strictly amateur hour.Making matters worse, they often re-use “stock” images for hallways or other mundane adventure features. The music used in the game is atmospheric, and at least sometimes keyed in with the scene being described. That said, there isn’t a lot of it and it can wear a bit thin after a while.

If you like choose your way adventure games and are willing to suffer the slings and arrows of wildly random combat and ability checks, then give it a try. I certainly enjoyed a few hours of playing the various adventures. Some of them were quite fun. Just be sure to roll up what feels like an utterly broken character or you may find them simply frustrating.

I don’t recommend you spend any money on this game unless you are just interested in putting money in the tip jar to encourage them to make more adventures for it. There are simply better games to spend your money on and ultimately, there needs to be a much better implementation of this type of game.