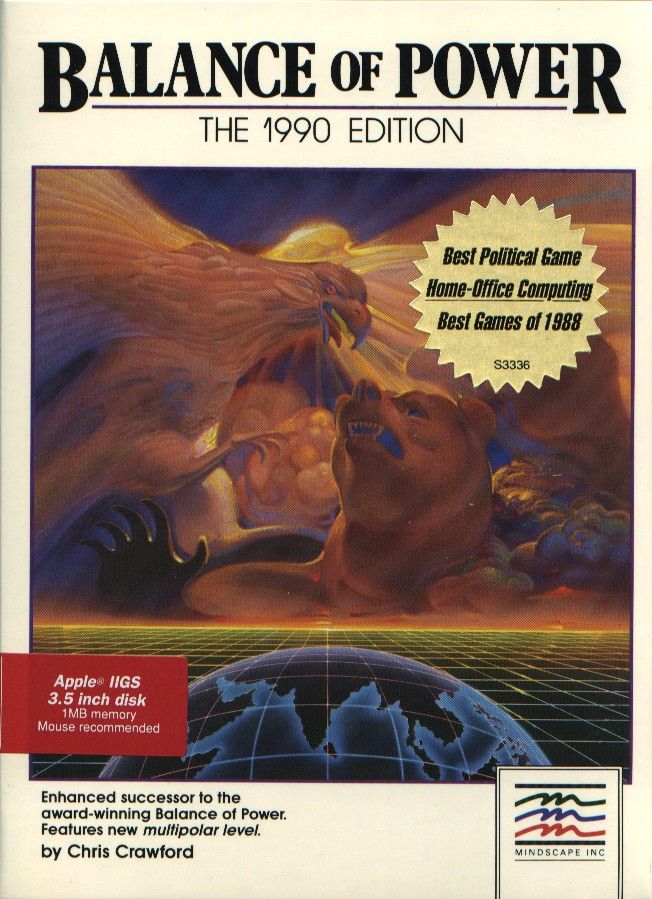 Balance of Power – A Game Everyone Should Play

So what is Balance of Power?

Balance of Power was a game published in 1985 by Microprose for the Macintosh. It was designed by Chris Crofford, who at the time had a strong reputation as a game designer though Balance of Power would be his last hit game.

In Balance of Power, you play as either the United States of America (US) or Union of Soviet Socialist Republics (USSR). Your goal was to spread your geopolitical influence as widely as possible through the world without triggering a nuclear holocaust.

Each turn you could spread your influence with various gifts, threats, troop placements, or the like. Your opponent would be doing much the same. World events could shift the balance as well. The world began in a state something like 1985s political environment and unfolds from there.

Each move by either superpower can be called out and objected to. This leads to a kind of diplomatic back and forth. Each side will have opportunities to back down or stand firm. But should you push the other side too far, or if you feel inclined to end all human civilization, nuclear war begins and everyone loses.

Why everyone should play it

At the risk of being a real downer, it’s well worth noting that the US and USSR still both have sufficient nuclear arsenals to render the civilized world a radioactive hellscape. I feel like this fact can’t really be understated in terms of how important it is to understanding geopolitics and in terms of extant threats to humanity. Folks who didn’t live through the cold war tend to gloss it over.

Balance of Power both serves as a reminder of this grim fact, but further demonstrates the fact that these weapons really do mean that the only real win is a kind of balance. Any nation with nuclear weapons has a kind of fail-safe that makes a certain level of conflict into a no-win scenario. The result is that these powers largely dance around one another creating conflict in “safe” places. More specifically nations without nuclear arsenals.

From a game design perspective, it represents some excellent out of the box thinking. It was a very innovative style of game for its time, and both captured people’s imaginations and inspired a kind of tempered gameplay you rarely see. Mind you, that is partly because a game that you can’t win too much at without loosing is not really the most satisfying experience for the average gamer.

How you can play it

Like many old games, it can’t be purchased anywhere, but it is still available in various locations.

You can get binaries on the amazing Internet Archive as well as play the game using emulation.

Note: You may run into a challenge because the game uses a “manual lookup” copy protection scheme. This means you have to answer a challenge question from the manual. Here is the 1990 version manual.