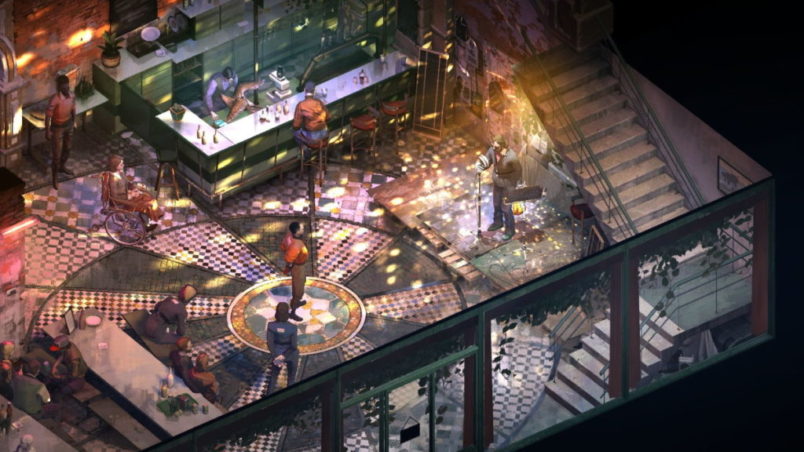 Disco Elysium is a game I’ve waited a long time for. Not because I’ve been following its development, but because it delivers features I’ve long desired in an RPG/Adventure game. I think its a great achievement for its creators.

I would describe Disco Elysium as an adventure game with some RPG elements thrown into the mix. It’s set in an alternate universe, but one that is more or less contemporary with ours in terms of technology. It’s a detective story at its heart, but with a strong surrealist and psychedelic spin.

You play a cop who’s lost his memory to epic abuse of alcohol and monumental despair. None the less, he’s got a murder to solve amidst the background of a labor strike threatening to erupt into further violence.

The gameplay centers itself around dialog. About half of that dialog is with other people in the world, the other half is with yourself or with inanimate objects you encounter. According to the author, there are around 1 million words of dialog in the game. This isn’t a text-only game. Your character walks around on isometric style maps, has visual inventory, and so forth, but for the most part, the action takes place through text.

You also have four stats and 24 skills that you select when making your character. As you play, you get experience points you can use to build these up. You can also equip clothing to give you temporary bonuses. Finally, there is a “thoughts” system where you can fill your mind with different paradigms that modify your skills in various ways.

These skills modify your dialogs and when interacting with the world around you. If your character is a big tough guy, then he’s going to solve problems with his fists, if he’s a brainiac then you can pretend to be sherlock homes. The kind of character you make will strongly influence what solutions you find for the game’s challenges.

There is no combat system here, though there is the potential for combat. Everything is resolved with a simple skill check system. You are shown the odds of success and if you so choose, you can take your chances.

This is not really a puzzle-style adventure, though there are many problems to solve. Most of these challenges have a wide range of viable solutions. The core murder story is just a small slice of the many stories and experiences you can involve yourself in.

The game takes place over the course of about a week and is mostly limited to a single seaside town. It’s the depth of detail that fleshes this game out into a very fulsome experience.

It’s brilliant and I love it. Disco Elysium elevates the art of dialog-based games to a whole new level. The depth of dialogs with characters is astounding. The dialog is not there just to give the player what they need to know to solve the murder. It is the heart of the game and it is rich, varied, and highly reactive to the player’s choices.

The game is paying attention to what you say and do. Your interactions with one character can affect attitudes with others. You can define your character’s moral and political philosophy through dialog and that can have real impacts on how the story plays out.

The writing is excellent. It can be slightly self-indulgent at times, but it’s always full of imagination. Some moments are hilarious, others heartbreaking, and others mind-bending weird.

One aspect of this game that sets it apart is its style of consequence-based gameplay. In Disco Elysium, there are usually many solutions to any given problem. Your choices and skill checks in the game will both open and close doors as you play.

Most games punish you for failing a skill check in a dialog, with Disco Elysium, you never really know. Failure might lead to a new way to solve your problem. It encourages you to just go in the direction you want to take the story and see what happens.

The end result is an adventure game where the story that gets told is nearly as much in the hands of the player as the creators of the game. Those 1 million words of dialog mean that you get to mix and match all that to create your own gonzo detective story.

If you don’t mind a game that is predominantly about reading dialogs and making choices, then you will probably dig this game. If you love adventure games and have always wanted one that gives you a lot more freedom to tell your own story, you absolutely must buy Disco Elysium as soon as possible.

Try not to go into the game with the mindset that you need to “win.” Come up with a concept for what kind of detective you want to be and see where it takes you.

This website uses cookies to improve your experience while you navigate through the website. Out of these cookies, the cookies that are categorized as necessary are stored on your browser as they are essential for the working of basic functionalities of the website. We also use third-party cookies that help us analyze and understand how you use this website. These cookies will be stored in your browser only with your consent. You also have the option to opt-out of these cookies. But opting out of some of these cookies may have an effect on your browsing experience.
Necessary Always Enabled
Necessary cookies are absolutely essential for the website to function properly. This category only includes cookies that ensures basic functionalities and security features of the website. These cookies do not store any personal information.
Non-necessary
Any cookies that may not be particularly necessary for the website to function and is used specifically to collect user personal data via analytics, ads, other embedded contents are termed as non-necessary cookies. It is mandatory to procure user consent prior to running these cookies on your website.
SAVE & ACCEPT
LIVE NOW! CLICK TO WATCH.
CURRENTLY OFFLINE :(