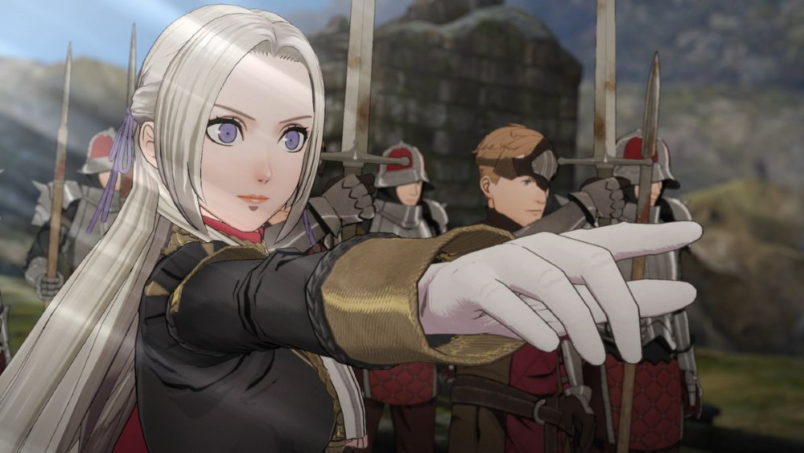 I used to play Fire Emblem games on my Nintendo DS. That was quite a long time ago. I loved how those games took turn-based strategy and made it personal. Instead of faceless warriors sent to slaughter, I cared about my units and their fate.

I think I played the first two that got a North American release. When they moved to other Nintendo platforms, I didn’t keep up. Now, once again I have a Nintendo console (the Switch) and I’m able to enjoy the latest version of this venerable franchise.

Fire Emblem: Three Houses (FETH) is the latest in a long series of Fire Emblem games. They are primarily turn-based strategy games set in largely European style fantasy settings. The series is famous for featuring character-driven stories and characters/units that once dead, stay dead for the duration of the game. They want you to care about the people who are doing all this fighting.

This incarnation moves the gameplay of the series in some new directions. The game is set in an officers academy and you play the part of a professor whose job it is to develop and train the cadets. You will spend as much time teach and talking to them as you will on the battlefield, probably more. You are tasked with managing time and other resources they need to win on the battlefield.

An epic story unfolds over the course of the game involving the fate of three kingdoms and the lives of the academy students. Relationships develop among the characters and you can learn a great deal about their lives, ambitions, and the world of the game in the process.

For the most part, the story is mostly linear, but your early choice of what house to join will yield three very different narratives and there is a fourth branching story available somewhat later. Beyond that, exploring relationships with and between the many students offers a lot of variety. Should you lose them in battle, you lose their stories as well.

Combat takes place on medium-sized maps, mostly outdoor areas or inside castles and the like. The action is turn-based but each time units come into conflict there are animations you can watch. There are lots of mechanics to play with. Every character has a number of stats and abilities that impact the fight. There are items and support troops to contend with and a large array of classes to experiment with.

Between fights, you will engage in character dialogs, teach classes, plan meals with students, do some gardening, do some fishing, compete in tournaments, and a few other mini-game like activities that represent social and academic life at school. Time and resources are limited so choosing what you will do is a meaningful strategic decision.

You can get Fire Emblem: Three Houses on Amazon and through the Nintendo store. (the Amazon link tips our site)

I think, by and large, it’s a wonderful game. Its strongest calling is the wild cast of characters you can play and interact with during the game. The art, voice acting, and storytelling really are a lot of fun. Nearly every character can develop a relationship with nearly every other character. This makes for an awful lot of dialog you can watch and enjoy. There is very little bad you can say about this aspect of the game, it really is top-notch.

The storytelling for the overall plot is also very strong. There are some moments that can be head-scratchers, but they are largely forgiven because the drama of the situation is still compelling. I’ve played two of the three storylines, and while one was narratively superior to the other, both have real merits and are worth playing.

I am a little disappointed by combat in this game. This is what I was most keen on, and it’s perhaps the games weakest link. The system is good, and the sheer range of options is very satisfying but two problems stand out here.

Firstly, the game is simply a bit too easy. Even playing on the hard difficulty with the permanent character death option, you are rarely in real danger and there isn’t a lot of tension. Your character has a unique ability to rewind time. It has limited uses, but it always seems to be enough to fix a tactical mistake. And if you really want to build some almost unkillable characters, it’s not hard to do. A recent patch has added “Maddening” difficulty. This may be a solution to this problem.

The second problem is that the maps are often uninspired. There isn’t a great deal of strategic depth or very many unique tactical challenges. The main storyline maps have a little of this, but the side missions and filler combat missions are very simple. There are a few standouts that really do take some strategic thinking, but in most, you just run the same basic tactics and you will crush your enemies easily.

I have mostly good, but somewhat mixed feelings about the school time gameplay elements. They are quite fun at first, but over the course of a full game, I found many of them became tedious and time-consuming. To be fair, the fishing was tedious almost immediately.

There is a lot of strategic depth to this part of play. You have to balance limited opportunities, limited time, and limited resources with lots of available choices. This is also the part of the game where you relax and watch character dialogs as relationships develop. But I found myself wishing that I could speed up or streamline many of the elements. Overall, this part of the game is very good but could use refinement.

By all means, if you are a fan of the series, buy this game. It’s great. It’s on a lot of peoples best of 2019 list for good reason. If you like story-focused games, it’s a great pick. If you like turn-based strategy, it might not be the best available, but it’s still darn good.