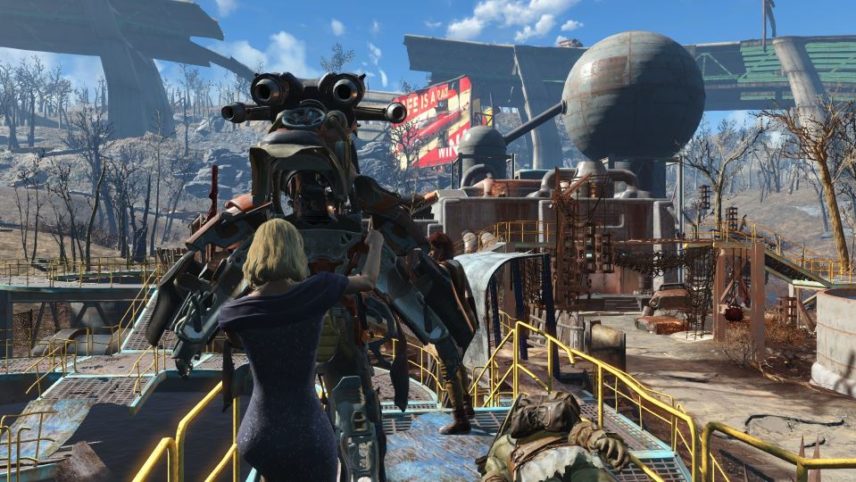 I think making soundtracks for games is a difficult task. You can spend hundreds of hours playing a truly fantastic video game. The challenge of filling all that time with sound and music you won’t grow sick of hearing is a daunting one. For me, many games fall well short of achieving this.

The fallout series is set in alternate-history earth in which the world was destroyed during the height of the cold war in the 1970s. The visual style of the technology and architecture reflects a vision of the future from the 1940s and 1950s. Since the first game in the series, they used the 1940s and 1950s era popular music to reinforce the tone.

The music sets a discordant tone between melancholy sadness and aggressive optimism, themes echoed in the narrative stories the game tells. It’s a vision of a society with incredible ambitions that is reduced to great sadness and the new ambitions that arise among the survivors are often crushed by the harsh realities of violence.

Starting with Fallout 3, the Fallout games switched to a first-person perspective and began to include historical music. Subsequent games continued to use and expand on the same playlist, even including a few original compositions made for the games. In the game, the music you hear is played by wasteland radio stations you can tune into through your “Pip-Boy” device, a kind of PDA of the retro-future.

There is a nice collection of the Fallout 3 playlist here on YouTube.

Why is Fallout 3 my favorite soundtrack?

Foremost, it’s the first game I think of when I think about game soundtracks. To this day, if I hear any of the songs from the soundtrack in any other setting I immediately think of Fallout. Even other songs of a similar style and period bring back memories of playing the game.

I likely spent hundreds of hours listening to these tracks and yet, I never grew especially tired of hearing them. The variety and quality are both such that they kept me company during my long tracks across the wasteland of the game.

The game and the music truly complement one another. The music enriches the game by strengthening the sense of time and place; their ability to entertain on their own, and the ironic subtext they add to the game through their cheerful optimism in the midst of nuclear horror. The game in turn gives the songs a context you don’t get if you are just listening to them alone. The imagery and events happening in the game make the songs feel far more relevant than they otherwise would in our modern lives.

You can buy the Fallout 3 Original Sound Track and the music featured on GNR.

All About the Radio

The decision to offer the music as an in-game radio station is also a pretty brilliant move. GTA III (2001) is the first game I know of to have in-game radio so Fallout 3 (2008) can’t get credit for innovating it. None the less, it is incorporated brilliantly. The radio works as a natural way to introduce music into a game about wandering alone in the wastes and it is used as a way for the game to give messages to the player about what is happening in the world around them. This makes you feel much more connected to a living breathing world.

Giving the player control over when they do or don’t want a soundtrack playing is a great way to ensure it doesn’t get tiresome and detract from the experience. You can even tune into various different stations to get a different vibe going during your adventures.

Finally, there is the sheer novelty of the music itself. By the time I was listening to the radio as a kid, the music of the 1940s was heavily eclipsed by the rock and roll of the 50s, 60s, and 70s. The 1940s jazz and dance weren’t part of rocks obvious lineage so it all but dissipated. For me, the fallout games led to the discovery of a whole era of American popular culture.

If your keen to play Fallout 3, you can grab it on the Humble Store and you can support this site by leaving a tip for us if you like.

A few of the other games that came to mind for this category.

Acranum was another isometric RPG and a contemporary of the original Fallout games. It featured an original soundtrack of classical-inspired music. I had the soundtrack disk for it and often listened to it when I wanted to chill out.

Peggle Delux used ode to joy in such a brilliant way whenever you finished a level. The overall sound design was likewise genius. Everything about it really felt engaging and exciting due to the sounds being pared perfectly with the experience.

Tunnels of Doom was one of my first serious computer RPG games. It was released for the TI-99 4a home computer and came on a cassette tape. It didn’t have much music but I loved the opening theme when I was a kid. Now… well it’s quite impressive for its time.